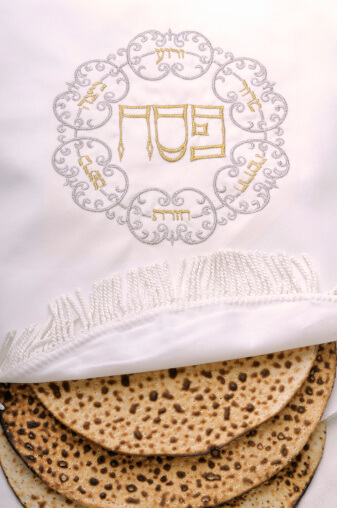 For seven days you are to eat bread made without yeast.

The Torah (the Jewish Bible) in Exodus 12:14, states that the holiday of Passover is to be seven days long. It says, “”This is a day you are to commemorate; for the generations to come you shall celebrate it… for seven days you are to eat bread made without yeast.” However, it is only celebrated for seven days in the land of Israel. In all other countries, it is celebrated for eight days and nights.

The reason that Passover is eight days in most of the world but only seven days in the land of Israel has to do with the Hebrew calendar, which is a lunar calendar. That means it is determined by the moon rather than the sun. In ancient Israel, in the days of the holy Temple, the dates were determined by people actually looking up at the moon each month. Two qualified witnesses had to go before the Jewish court of 70 judges (called the Sanhedrin) to testify that they had seen the new moon. This would establish the start of the new month.

Unfortunately, in those days there was no fast transportation and the runners sent to deliver the news about the new month had to go by foot, by donkey, by camel, or by horse. They were not able to travel as fast and it was possible that by the time they arrived in a new location with the news, the dates could be incorrect. The communities far from Jerusalem, therefore, celebrated all of the holidays for one extra day, just to be careful.

The Jewish Talmud, the record of the “oral Torah,” (in Rosh Hashanah 25a) states that the exact length of a lunar month is 29.53059 days. (This has since been confirmed by many scientists, using the most advanced methods.) Therefore, it was possible for Jewish people, even those living in distant lands, to determine the exact dates of the months in the Hebrew calendar. In spite of this, people in the diaspora continued – and continue until today – to celebrate the extra day of Passover. Why?

In the 5th century BCE, when this information was known already, the patriarch Hillel II both set up a perpetual calendar and he also made the additional day of Passover an institutionalized requirement. He saw that as Jews were exiled from Israel, they were at risk of losing their sense of community and thus their heritage. Like so many other exiled societies, the Jews were at risk of being swallowed up by the societies they were settling in. Therefore, he instituted the extra day of celebration as a way to encourage the Jews to unite even in exile.

Today, most Jewish people continue to celebrate eight days of Passover unless they live in the land of Israel. In this way, they remind themselves that they are living in exile and not in their true homeland of Israel. Israeli residents who travel outside of Israel for the holiday still keep Passover for seven days, while foreign visitors to Israel still observe Passover for eight days.