Passover Fun » About Passover » Why do some Seder Plates hold Five Items and others Six Items?
Share
Tweet
Pin
0 Shares 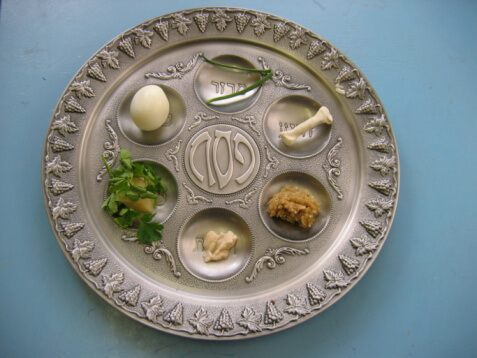 One of the holidays where these differences in customs is most noticeable is the celebration of Passover. In Passover, one of the most important rituals is the seder, a traditional dinner and retelling of the story of the exodus from Egypt. The Seder centers around the Seder plate, which holds the symbolic food items central to the telling of this story. However, some Jewish people use Seder plates that hold five items and others use Seder plates that hold six items.

The function of the Seder plate is to provide a centerpiece with all those items essential to the retelling of the story of the Exodus from Egypt. There are five items that are absolutely vital and must be included: maror, a bitter herb (such as horseradish) symbolizing the bitterness of slavery in Egypt; charoset, a roughly chopped brown mixture of nuts, wine, cinnamon, and fruit (usually apples or dates), which symbolizes the mortar the Jews used when building for Pharaoh in Egypt; karpas, a vegetable (usually potato, parsley, celery, or onion) that is dipped in salt water to represent the tears of the Jews in Egypt; zeroah, a sheep or goat shankbone or a chicken wing or neck, which symbolizes the Passover sacrifice that would have been made in the days of the Temple; and the beitzah, a hard-boiled egg, which represents the festival offering that would have been made in the Temple, and which is a mourner’s food meant to remind the Jews of the destruction of the holy Temple in Jerusalem. Because these five items are definite requirements at the seder, all Jewish people include them one the Seder plate.

However, some Jews are more stringent and also include another type of bitter herb, called chazeret. This is usually romaine lettuce or celery and also represents the bitterness of slavery in Egypt. Although the leaves of this herb are not bitter, the stem becomes bitter when left in the ground and this represents how the Jews grew bitter during their time in Egypt. Because this herb is used in the seder, some people see it as part of the Seder and thus feel it is essential to include it. Those who do not include it will often place a bowl of salt water for dipping in its place.