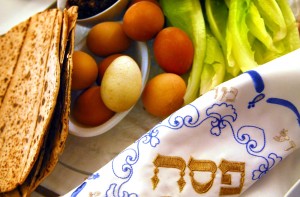 Eggs are part of the Seder meal

Pesach is a Jewish holiday, called Passover in English. It celebrates the time when G-d freed the Jewish people from their slavery in Egypt. It also celebrates the beginning of the harvest in Israel. It is one of the most important holidays in the Jewish calendar and is one of only three holidays that required the ancient Jews to make an annual pilgrimage to the holy Temple in Jerusalem.

Pesach is a Hebrew word with several different meanings. One of these is, “He passed over,” which refers to when G-d passed over the Jewish houses during the tenth and final plague, the death of the firstborn. While all the Egyptian firstborn sons died that night, Jewish firstborn sons lived. Another meaning is, “He hovered over, guarding.” This is reference to how G-d hovered over the Jewish people, both during their flight from Egypt and during their subsequent wandering in the desert. During those times, He protected them from their Egyptian attackers and also provided them with food to eat and even kept their clothing new. Finally, Pesach can be translated as, “He had pity,” which refers to the fact that G-d had pity on the Jewish people and took them out of Egypt sooner than He had originally said He would.

Pesach is a holiday with many traditions and rituals. Thus, you will find that even Jewish people who are not very religious will still celebrate it by keeping to the original customs of the holiday. One of these customs is not to eat (or even own) any grain with leavening during the entire holiday period. Instead, Jewish people will eat only a special kind of unleavened bread called matzoh. The matzoh has many meanings to the people who are eating it. It is called “the bread of affliction” because it reminds the Jewish people of their suffering in Egypt. It is also a food that represents freedom and, more literally, that the Jews left Egypt so quickly that their bread had no time to rise.

Another Pesach ritual is a ceremonial meal known as the “seder.” In most of the world, there are two seders (on the first two nights of Pesach), while in Israel the Seder is held only on the first night. The Seder includes many rituals, including a special washing of the hands, eating herbs dipped in salt water to represent the tears of the Jews in Egypt, eating bitter herbs (like horseradish) to symbolize the bitter labor of the Jews in Egypt, and eating a special mixture of apples, wine, and walnuts meant to represent the mortar the Jews used when building for Pharaoh in Egypt. All Jews must also drink 4 cups of wine and must eat a certain amount of matzoh. Most Jews also use a special book called the Haggadah, from which they read the story of the Jewish exodus from Egypt during the meal.

Pesach is one of the most important and special Jewish holidays. It is a celebration of the Jewish redemption and their current freedom. Jews all over the world use this as an opportunity to thank G-d.