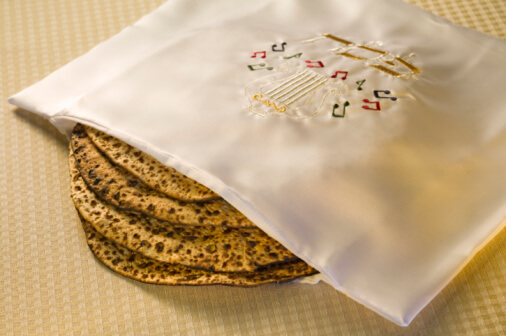 The Affikomen is a piece of unleavened bread called Matzah that is eaten during the Passover Seder.

. The word “affikomen” comes from the Greek word for desert. The last thing that is eaten at the Seder is a piece of the affikomen. The reason for this is to keep the taste of mattzah in the mouth after the Seder.

A Passover Seder is a retelling of the story of the Jews’ days in Egypt. They were slaves in Egypt until the Lord, through Moses, led them into the desert. They escaped after the Lord inflicted ten plagues on Egypt. Pharaoh, the King of Egypt, released them. The Seder is a celebration of the Jews’ escape from slavery in Egypt and a retelling of the story of slavery, and during the eight days of passover.

During the Seder and the eight days of Passover, observant Jews eat only unleavened bread. This means that they cannot eat things like bagels, cake, or pizza because those have dough or batter that rises. Matzah can be circular, rectangular or square. The only ingredients are flour, water, and salt. There is no yeast, baking powder, or baking soda or other things that make breads and cakes rise. It generally tastes pretty bland and looks like a brown and white cracker.

During the Seder, the host takes the middle piece of three matzahs that are next to the Seder plate and covered by a cloth bread cover. The host breaks it in half. The host returns half to its original location and hides the other half. The children at the Seder get a chance later to look for it. The child who finds it then negotiates with the host for the return of the other half. The Seder cannot conclude until the host has the whole affikomen. The Affikomen is a replacement for the sacrificed animal that used to be eaten in the days of the Jewish temples.