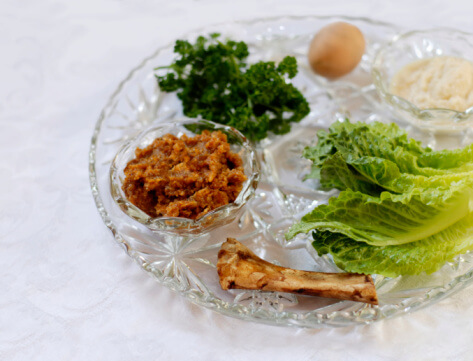 Haroset is a chopped apple mixture that symbolizes the mortar the Israelite slaves used in building.

Haroset is one of the foods eaten at the Passover Seder. It is pronounced with a guttural “h” sound at the beginning like in the Jewish toast Lichayim, the holiday Chanukah, or in the German word Achtung. Haroset is also one of the foods that is featured on the Seder plate. The Seder plate is the ceremonial plate that holds some of the symbolic foods that are eaten during the Seder. The Seder is a meal that is eaten on the first two nights of Passover outside of Israel, and on the first night of Passover in Israel. The Seder is a reminder of the Torah story of the Jews’ escape from slavery in Egypt. Haroset symbolizes the mortar that the Jews used as slaves in constructing brick buildings for the Egyptians.

Although haroset could be eaten at other times of the year, it is generally only eaten during the Passover Seder. There is no uniform recipe for haroset because the ingredients are not specified in the Torah (what Christians would call the Old Testament) or the Talmud. However, some of the ingredients are mentioned in the Song of Songs as bringing to light the attributes of the Jewish people themselves. There are many varieties of haroset. Variations depend upon what fruits and nuts are readily available in the given part of the world as well as local traditions.
In the United States, haroset is often made out of fruit such as apples, wine, nuts, cinnamon, and sugar. The apples are finely diced. The nuts are chopped. Sweet red wine such as Magen David, sugar, and cinnamon are mixed together with the apples and nuts. The mixture is not cooked. It is served at room temperature or cold. The end result is a somewhat sticky, brown, sweet paste that can be eaten alone or on a piece of Matzah (unleavened bread that is eaten during the holiday of Passover).

Also during the Seder, it is a tradition to make a Hillel sandwich. A Hillel sandwich is named after a Rabbi named Hillel, who lived in Jerusalem in the last century before the Common Era, who suggested mixing the haroset with two other foods that are eaten at the seder. He suggested making a sandwich out of matza, haroset, and a bitter herb such as horseradish. The bitter herb is a reminder of the burdens of slavery. The sweetness of the haroset is a reminder of the sweetness of redemption.